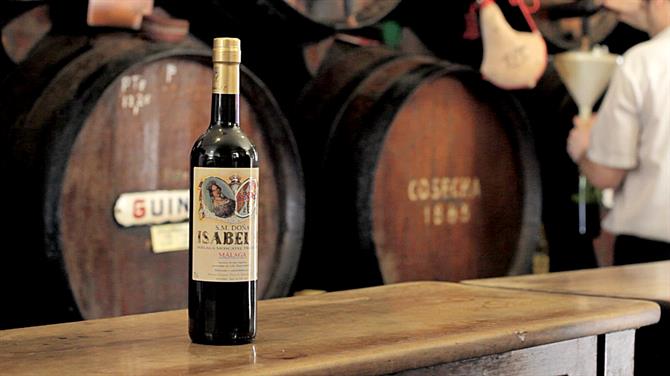 The average visitor to Málaga may not be aware that it is a wine-producing region. The wine lists in the city’s tapas bars are replete with reds and whites from northern regions like Rioja, Ribera del Duero, Navarra and Rueda, and if you ask for a ‘copa’ of wine, chances are you’ll be served a glass of one of these. Nonetheless, Málaga does produce some fine wines and even has a fascinating wine museum, situated in a baking hot square near the river.

The museum has an abundance of information on the production of dry and sweet wines, the former labelled D.O. Sierras de Málaga, the latter D.O. Málaga.  The area of production is large, comprising five distinct zones; helpfully, samples of the different soils are provided in glass jars for the visitor’s edification. I took the opportunity to feel the slate that predominates in the eastern sub-region of Axarquía and couldn’t help wondering how on earth vines can grow in such a soil.

There is considerable diversity in Malaga’s vine-growing areas. This won’t be surprising to anyone who has taken a bus out of the city to the north, where you climb from the sunny Mediterranean coast over stony hills to reach a plateau. The harvest, for instance, lasts from the start of August to the end of October. The steep and mountainous vineyards of the Montes, Norte and Serranía de Ronda zones have a continental climate, whereas the Occidental and Axarquía sub-regions are influenced by their proximity to the sea.

The main grape for dry whites is Moscatel de Alejandría, which is prevalent on the limestone soils of the cooler, Atlantic-influenced area of Occidental in the west. French grapes, notably Syrah, Cabernet Sauvignon, Merlot and Petit Verdot account for most red wines, even if a local black grape called Romé is also grown. Black grapes are largely grown in Serranía de Ronda in the northwest, where vineyards are situated at an average height of 700 metres. Summers here are hot, while winters are cold.

Malaga’s calling card is its sweet wines, made from Moscatel and Pedro Ximénez. These are either fortified or made from grapes that are laid out in the sun, a process called ‘asoleo’. The dried grapes have a sky-high sugar content, to the extent that you can almost feel the sugar sliding down your glass as you take a sip.

At the end of my tour of the museum, I was served a dry, crisp, unoaked and medium bodied Moscatel, which had aromas of grass and citrus, and would serve as a lovely aperitif. I also tasted a headbanging Syrah, labeled as ‘roble’ (oaked). It was made from ‘old vines’ (an elastic term) and clocked in at a headbanging 15% alcohol, no doubt a reflection of the intensely sunny climate. It was quite mouth-drying but had sufficient fruit (ripe dark plums) to balance that, as well as the note of spice so characteristic of Syrah. Nor did the alcohol stick out. Best of all, though, was a luscious Pedro Ximénez, which had intense flavours of raisins, dates and figs.

I did this tasting for 5 euros on an empty stomach before lunch, and the wines went straight to my head. It was a very pleasant way to spend a Saturday morning. 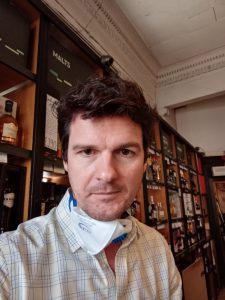 Michael works for a wine merchant in Scotland and is studying for the WSET Diploma. He has a travel blog at michaelpwalker.blogspot.co.uk

The personal information collected in the application form will be used by TBCL to process your registration for course(s) and/or event(s).
Failuretoprovideanyrequiredinformationintheapplicationmayresultinadelayinsuccessfullyregistering your booking.
Your details will be kept confidential by TBCL and TBCL will not pass your information to a third party. Your details may be used to contact you and/or keep you informed of our events and courses. You consent TBCL to send you marketing, advertising, and promotional information through email, voice-call, text message and/or fax, in accordance to Personal Data Protection Act 2012 (PDPA).
A copy of your personal information / application form may be given to our accredited programmes partners for examination purposes. It is to confirm that you may have previously attended and passed any relevant examination(s) in order to qualify for the course(s) and/or examination(s) that you are applying for.
Our accredited programmes partners may contact you directly relating to the course(s) or any marketing advertisement. Please inform TBCL if you do not wish to receive any marketing or promotion advertisement from our accredited programmes partners.